XGo Superfluid | The Next Generation of Staking

Getting to know XGo

XGo is taking it back to the beginning; building a platform that helps people transition from a centralised financial system to decentralised blockchain rails. XGo is a Web 2.5 bridge that transitions new people to the decentralised economy; eliminating the complex jargon and onboarding ordinary people into a community of builders and visionaries. XGo is laying the foundations for a decentralised economy with the team dedicated to building the infrastructure for a new system; one that provides users with the freedom to make their own financial decisions and realise the full potential of blockchain technologies.

“With Superfluid, we empower users to maximize their crypto earnings by enabling them to earn protocol rewards while spot trading. We are excited to pioneer the frictionless Staking revolution and exclusively offer our users with zero lock-ups, daily reward payouts, and compounding APY.”

XGo has developed a new product that is set to solve one of the biggest drawbacks of normal Staking – illiquidity. Superfluid staking makes it possible to earn Staking rewards while trading your tokens; solving the illiquidity problem that has left many investors helpless in times of sharp downturns in the market. To understand why this is important, the evolution of Staking needs to be observed.

Understanding the evolution of Staking

The Staking industry has grown considerably since its inception, the total POS market cap has now settled at ~ $152 bn, the benchmark Staking interest rate is ~ 8.73% and the global staked value exceeds $100 bn. 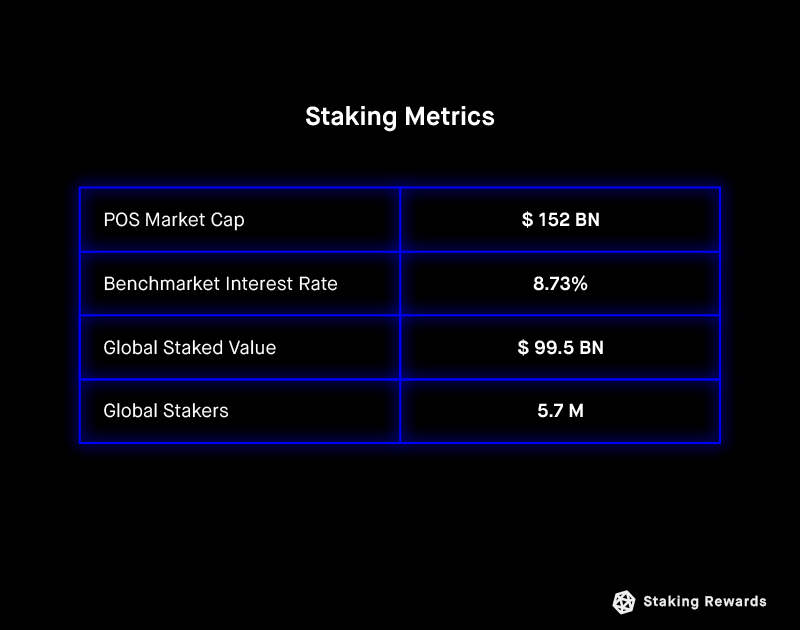 The growth in active stakers across major PoS networks have also been consistently growing over the past two years, showing a strong upward trend that is likely to hold course.

As part of a natural growth curve in any technology, there have been different advancements or ‘versions’ in Staking technology. Having a good understanding of this progression makes it easier to see the need for Superfluid Staking.

In traditional POS networks, staking is an integral part of the consensus mechanism and is necessary to maintain the integrity of the network. The first version of Staking involves users delegating their tokens to validators and earning a share of the Staking rewards in return. This is still the main way that users stake their crypto and is where the majority of staked assets lie. However, there are some drawbacks to this:

Consequently, this led to the next generation of Staking technology being developed.

Liquid Staking derivatives (LSDs) were developed to solve these problems by minting a token that represents the staked coins. This token can be used as one would use any other token, allowing investors to earn Staking rewards whilst being able to transfer, store, trade, and earn yield across decentralised finance products. LSDs might seem like a complete solution as they solve the core problems associated with normal Staking by giving users a liquid version of their staked asset.

However, given that LSDs are derivatives of a native token and strictly speaking, do not need to trade 1:1 with that token, they are subject to market forces and price discovery that can result in a deviation or discount to the price of 1 unit of that token. These deviations can cause problems to leveraged users in the form of liquidations or rebalancing of trade positions at a large scale, which can have a cascading effect throughout the crypto ecosystem.

Superfluid Protocol Rewards is the newest innovation for Proof-of-Stake blockchains. Through a blend of active on-chain and off-chain reward mechanisms, users can now generate Staking yields on their coins while still freely trading them, all from their wallets.

This technology brings a new level of liquidity to users and is set to revolutionise the way people trade their crypto. After being carefully developed by the innovative team at XGo, it has been dubbed “XGo Superfluid”.

The need for Superfluid Staking

Staking involves lock-up periods during which your assets are locked and untradeable. The lock-up period varies between different Proof-of-Stake (POS) networks and usually ranges from a few days to a month. Some CEXs will even lock up your assets for longer periods of time and offer you a slightly higher yield to do so. The need for liquidity in your assets cannot be overstated, as the market outlook turned bearish and macro headwinds started to swirl, many retail investors were left at the mercy of lockup periods. The key risks are:

XGo Superfluid Staking can protect you from these risks and give you the freedom to get out when you need to.

XGo Superfluid can be the catalyst for more adoption

Web3 is not yet ready for mass adoption, the UI of most dApps still require relatively high levels of technical knowledge and most people still struggle to store their private keys safely let alone make use of normal Staking or LSDs. The key to mass adoption is to have users interact with dApps in a way that is similar to their Web2 experience, without them even realising what is happening on the backend. XGo Superfluid has been developed as a complete solution to the drawbacks of normal staking and LSDs while providing a familiar UX for users. Nothing really changes from the user perspective, it is the same trading experience that they are used to, but now they are trading with yield-bearing tokens in their spot wallet, and getting rewarded for securing their favourite PoS blockchain, at the same time.

How do the yields on XGo Superfluid compare to native Staking?

The rewards offered by XGo Superfluid differ when compared to the native Staking yields you can earn on these assets. This is the tradeoff when using XGo Superfluid and investors need to weigh this against the benefit of having liquidity.

Investors looking to earn Staking rewards need to review their risk profile and understand the protocol rules of each PoS blockchain they are delegating their assets to. Depending on the protocol, native staking can expose investors to risks ranging from an unbonding period of 20+ days, slashing, and even delays in reward payouts.

In contrast, XGo Superfluid addresses all of the risk elements of native Staking. However, the Superfluid offering (spot trading and earning APY, simultaneously) is only available for portfolio values up to 10,000 USD. According to the XGo team, this threshold will likely increase in the coming months.

How do I get started?

Head over to XGo.com to sign up, once you have created your profile you can deposit some of your crypto on the platform and start trading like you would on any other CEX. Once transferred, XGo Superfluid Rewards can be enabled and users will start earning daily staking rewards while spot trading.

Is there a limit to what I can deposit in my trading account?

Yes, there is a limit on the maximum amount of rewards an XGo user can generate through the rewards program. At present, XGO will only provide rewards for portfolios up to 10,000 USD.

Who is eligible for XGo Superfluid Rewards?

All XGo users that have verified their account and completed two-factor authentication.

What fees do you charge on XGo Superfluid Rewards?

There are currently no fees for participating in the XGo Rewards program.

How often are XGo Superfluid rewards paid out?

XGo rewards are paid out daily.

How does XGo generate rewards on the tokens?

XGo generates rewards through a mix of off-chain and on-chain rewards participation.

What’s the difference between On-Chain and Off-Chain rewards?

What does XGo do with Off-chain funds?

XGo provides more detail on the off-chain funds in their Terms of Service.

XGo Superfluid has a compelling offering for retail users, one that could develop into a mainstream offering at major exchanges. Through a blend of active on-chain and off-chain reward mechanisms, users can now generate Staking rewards in their spot wallets while enjoying:

is purpose-driven, he loves researching and figuring out how technology can drive change in the world we live in. He is an avid crypto trader and spends his free time deep-diving into different projects on his YouTube channel. Kilian is currently on a mission to pioneer the institutional adoption of digital assets in his home country, South Africa.

Our mission is to make yield-generating crypto products discoverable and efficient globally by empowering retail users with unbiased, high-quality, and accurate information for drawing their own informed conclusions.

The staking industry is rightfully gaining momentum and an increasing market share in the crypto sector. Don’t get left behind. This weekly Substack publication explores staking assets and brings together market commentary and deep research analysis to provide you with cutting edge alpha. Sign up below and join our community of 69k subscribers.Subscribe